A Fashionable Throw Back Thursday 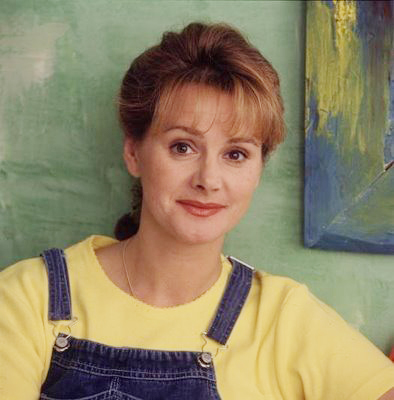 As spring approaches, the fashion news is shouting out the new trends. Oh, what to wear this spring? This year I am thrilled to say that I am 18 years
ahead of everyone. I have had several sarcastic comments already, mostly from my kids. “Look mum, you are finally in vogue!” Yes, the onesy, boiler suit, jump suit, dungaree, all-in-one, whatever you call that one-piece that was my signature dress for my first television series, The Painted House.
We began that show in the mid-nineties, as the DIY era was on the verge of explosion. In fact, The Painted House was pretty much the very first
decorating show in North America. We had the tiniest budget, about $10,000 an episode, about what we’d spend on lunches years later on my bigger-budgeted
shows with much, much larger crews. There was no money left for wardrobe and since I was constantly covered in paint, I was obviously not going to
be wearing Dior!I had a pair of dungarees that I wore in the garden and my hubby, who was directing me in those early years (not pretty), thought they were cute, so I wore them for the first episode. They were so practical, not just because of the mess but also for continuity, a big part of television production.
I had different coloured t-shirts underneath and could change quickly if we had to redo a previous sequence. The fans loved them too and so I started
to brighten them up with different shapes and patterns and numerous colours. I was lucky that the Victoria’s Secret catalogue suddenly started selling
them in numerous colours.In fact, the craziest thing happened. In those years, the government kept a very close eye on the Television Production Industry, and a tax auditor
was a constant feature at many production offices, including ours. One spring, a particularly bad tempered government auditor was ensconced in the
small office we had allocated to her, desperately trying to catch us out on some kind of tax cheat, when she leapt from the room waving some bills.
She told us that I was putting my sexy Victoria Secret underwear on the company accounts, waving the receipts hysterically at us. We explained, as
one would to a petulant child, that this is where I bought the clothes for the show – jump suits. She did not believe us, so hubby was sent home to
produce the evidence. He returned to the office with boxes full of paint splattered overalls, Victoria’s Secrets labels still attached, to the delight
of our office staff and to the dismay of the defeated looking auditor.
After 7 years of shooting The Painted House collected hundreds of these overalls – where did they end up? I remember an astute member of the Facelift team, my next series that had a bigger budget and a better wardrobe, asking me if he could have the old pieces. I was never going to wear them again,
so I filled the trunk of his car with piles of these colourful overalls. He put them on eBay. If only I’d kept them – I would have been so in vogue
this spring.