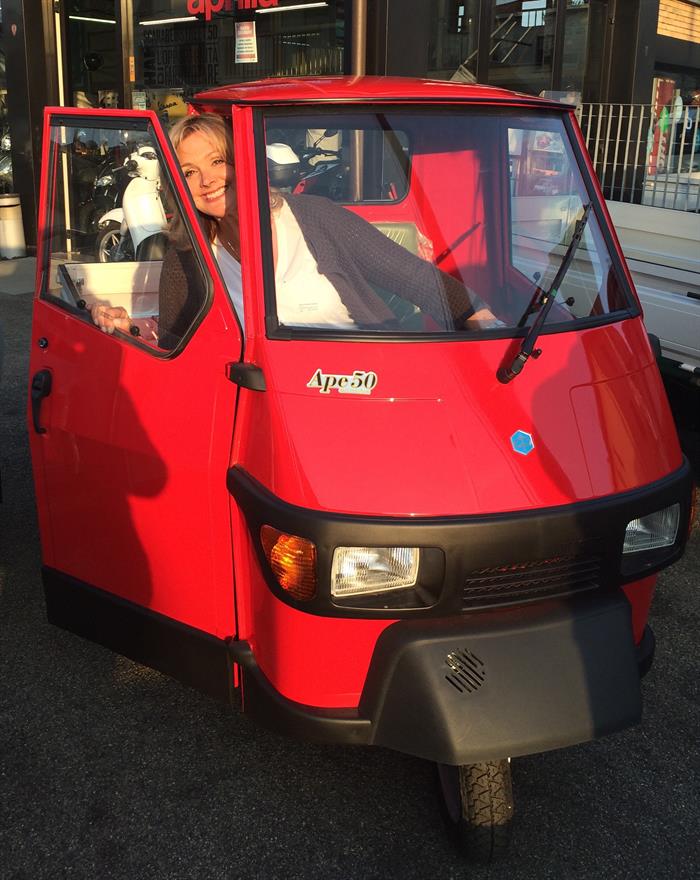 La Dolce Debbie, the documentary series about my journey renovating an ancient property in Tuscany comes to an end this week. I have to say my heart is full. The response has been overwhelming. I’ve received thousands of emails from viewers who have shared their dreams, their joys and pain and their hopes for tomorrow. This documentary has hit a chord with so many of you. You have told me that you have laughed and cried in your own living rooms. You have watched with your husbands, children and some have even made Tuesday night at 8pm ‘girls’ Tuscan night’ in your own homes.

This is my 5th television series. My TV career has very much been a journey through lifestyle programming. I began with a ‘how-to’ paint video which
begat 200 episodes of a ‘DIY’ show, followed by 5 years of ‘reality’ and design. Next came a ‘challenge’ series and then the big mega, over the
top ‘network’ design show. All were fun and thrilling to produce and host, but this little 3-hour documentary has been different. I actually began
my career in television in England, working on docs. Truthfully, they were intensely boring, especially for a girl in her twenties. Talking heads
chatting away about desperately serious subjects. They were always aired at strange hours until they eventually disappeared to be replaced by the
infomercial. Happily, we are beginning to enjoy the new type of documentary – the docu/soap, especially since reality TV has become more and more
staged and our senses have grown dulled.

At first I wasn’t enthused to make La Dolce Debbie. I was in my own world in Tuscany, knee deep in the renovation and the mud of my construction site. Did I really need a camera crew following me around? Then my thoughts changed. It was the magic and often the hilarity of the day-to-day events that I shared with friends that made me realize I should attempt to capture this sweet life. There I was camping inside the stonewalls of this ancient property. Half the roof was missing, I had no internal doors and a one-burner stove to both cook on and to keep me warm. What plumbing there was I shared with the numerous tradesmen working on the property. Now, I could have made an epic on just these guys and their array of wild personalities or the nightmare of working with the ‘Comune’ or city hall where I begged for permits weekly. The stories extended to the everyday life in my village. Here for example, is one of the many stories that I realized I just had to share…

One morning, I started my busy day with my usual long list or ‘to-dos.’ I headed for the post office and stood in line with what seemed like most of the village. No one cared that the queue was crawling at a snail’s pace – a geriatric snail. Alberto, one of my elderly builders, also waiting, chatted away to me in such a fast Italian that I couldn’t decipher a single word. As you know, my Italian is way below basic but he didn’t really care. He was telling me a fascinating tale about god-knows-what while he was waiting to buy a stamp, one stamp! As we crawled out of there hours later I somehow ended up in his little truck hurtling down a dirt road, through a gate and into his vineyard – everyone seems to have their own vineyard in Tuscany. After smiling appreciatively at his juicy grapes, I was invited into his home for coffee. His wife Silvia, resembled a succulent plum in her patterned apron that every ‘nonna’ seems to wear around the house. An hour later as I was trying to work up an excuse to leave, she proudly whipped up the most delicious lunch of countless dishes and of course several bottles of vino, actually quite superb homemade wine. I mean you can’t be rude so I tucked in. All meals must then be washed down with a wee digestivo followed by a quick nap on his white plastic chairs on the loggia (a kind of balcony.) Two hours later I was gently woken by Alberto. Wiping the drool from chin I climbed back into his truck to be dropped off with exhuberant hugs at my car still sitting outside the post office. By the time I returned to my construction site, the sun was setting and the builders were long gone. Another day in paradise, another ’to-do’ list barely touched.

I realized that these daily experiences that were so enchanting, so Tuscan, should be shared. So I agreed to a small crew following me around my
little world in the heart of Tuscany. I was never really confident that the viewers at home would embrace my journey, but they have, with open
arms. Not only did they watch, but I have been so touched by so many personal, emotional stories sent to me as they dream of their own next
chapters. I have loved every minute of this epic renovation – and thank you for letting me into your homes so that we could all dream together.